After my last year’s flop at making a Rhubarb Gallette…once again I could not resist the staunch scarlet stalks at the Green City Farmers Market. 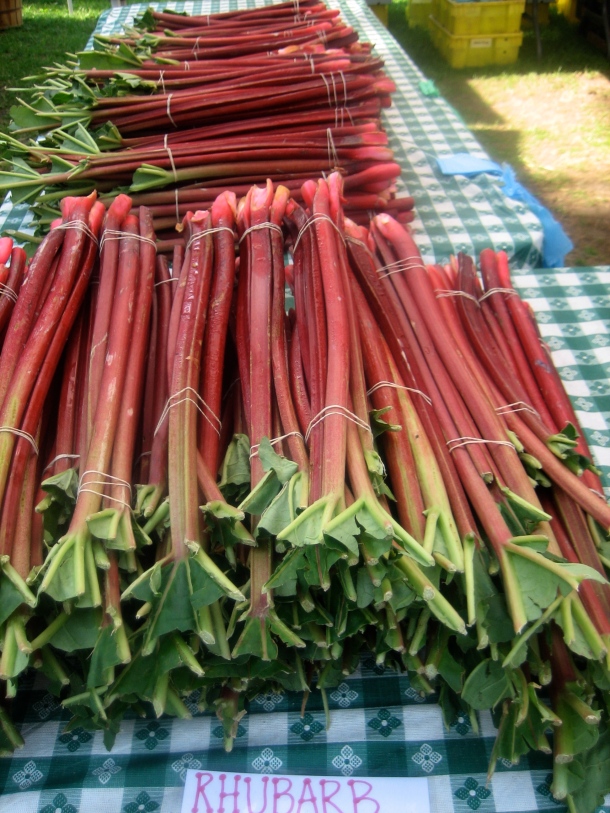 There was a recipe in the Italy Issue of Bon Appétit for “Rhubarb and Raspberry Crostata” by Karen DeMasco. I was ready, a year had passed since my last foray into the land of the giant stalks, full of complex sour and holding the promise of sweet.

So I bought 2 pounds of rhubarb from Abby Klug, the beautiful daughter of Mick, from Mick Klug Farm.

Encouraged by suggestions from Cynthe of  FigsWithBri.com —I forged ahead. Raspberries are not in season here… yet, but there’s always Trader Joe’s.

My only hesitation was the ice cream or whipped cream topping suggested; this Crostata is rich enough! But it’s a “great go for it” idea.

I added the Raspberry Vinegar Glaze instead. A bling girl,  I like the glossy finish. Enjoy! 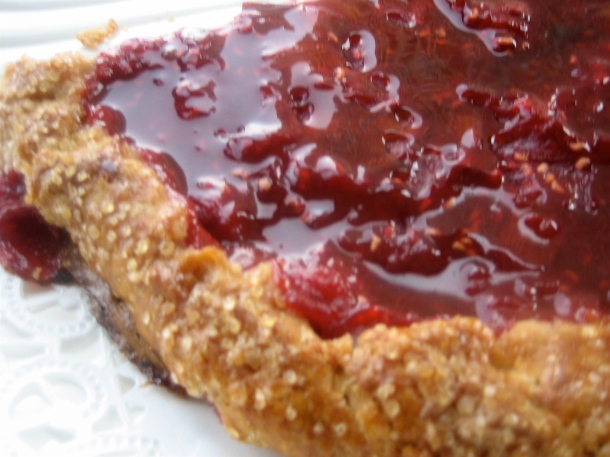 Crust With A Tender Nutty Texture 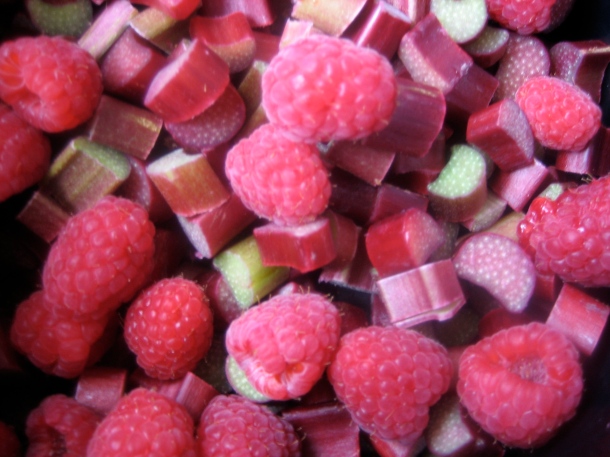 Combine flours, sugar and salt in a food processor; blend for 5 seconds. Add butter; pulse until butter is reduced to pea-sized pieces. Whisk egg and milk in small bowl to blend: add to processor and pulse until moist clumps form. 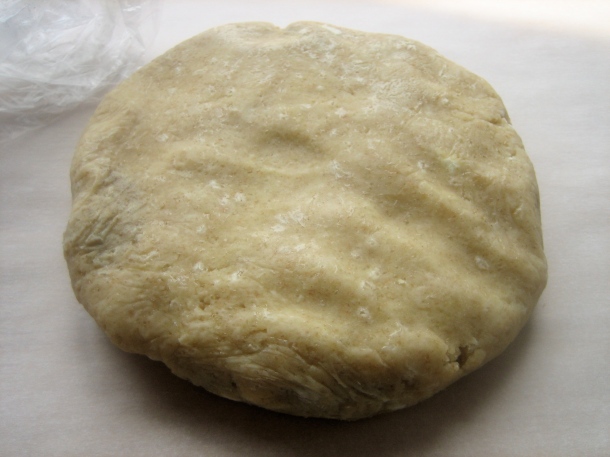 Form Ball Into Disk And Chill

Gather dough into a ball; flatten into a disk. Wrap in plastic wrap; chill at least 1 ½ hours. Do Ahead: Can be made 2 days ahead. Keep chilled. 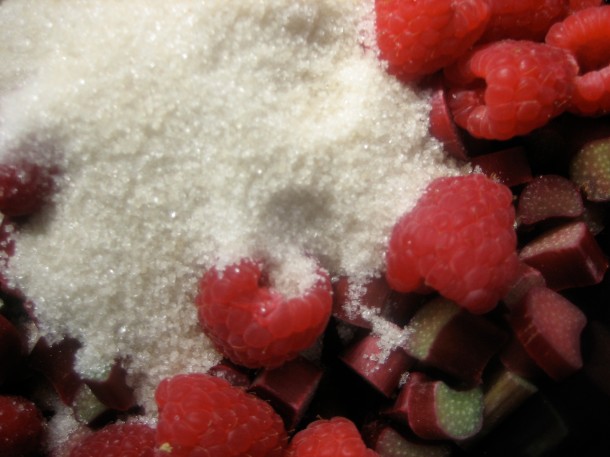 Cook over medium heat, stirring often, until sugar dissolves and juices a released, about 5 minutes.

Stir in cornstarch mixture and bring to a boil (rhubarb will not be tender and slices will still be intact).

Transfer to a bowl. Chill until cool, about 30 minutes.

GLAZE*   I added the Glaze

Stir vinegar and remaining 1/4 cup sugar in heavy small saucepan over medium heat until sugar dissolves. Increase heat; boil until syrup is reduced to 1/4 cup, about 6 minutes. Set aside.

Preheat oven to 400˚F. Roll out dough on floured parchment paper to 12 inch round: brush with beaten egg. 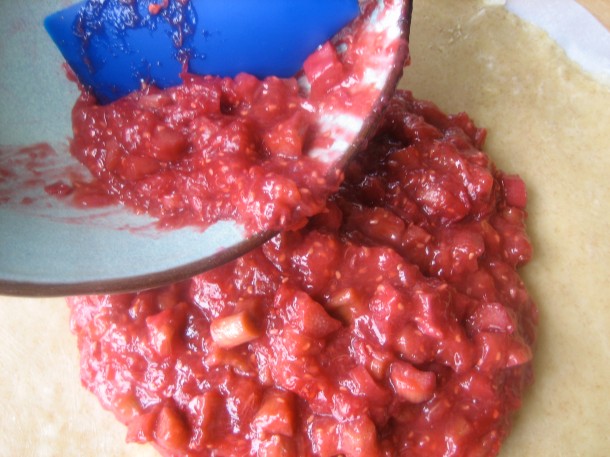 Mound In Center Of Crust

Gently fold edges of dough over filling, pleating as needed. Brush border with egg, sprinkle with raw sugar. Slide parchment with crostata onto a large rimmed baking sheet and bake until crust is golden brown and filling is bubbly, about 45 minutes. Let crostata cool on baking sheet on a rack. 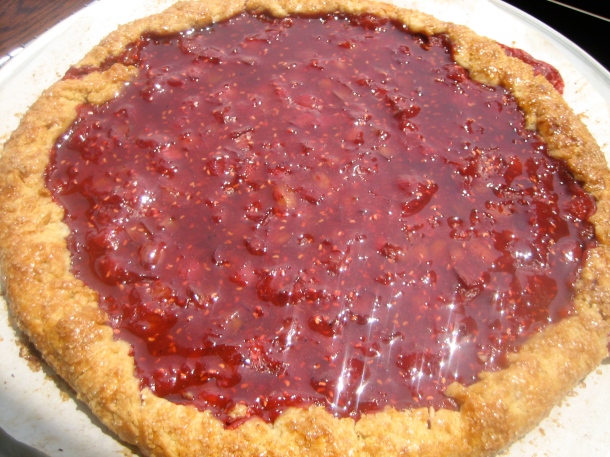 While still warm, brush top with raspberry vinegar glaze. Transfer crostata to a platter, cut into wedges, and serve. 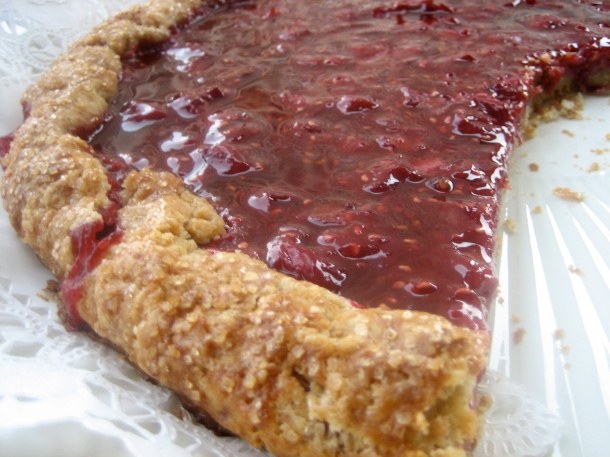 When you realize you’ve made a mistake,

take immediate steps to correct it.

This site uses Akismet to reduce spam. Learn how your comment data is processed.